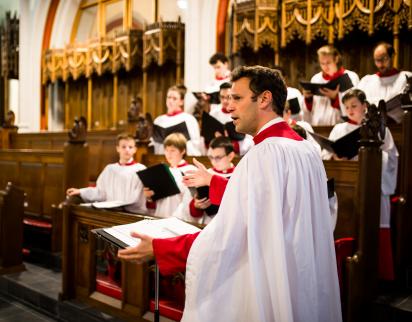 Founder and Director Nick Halley leading the choir in an Evensong (2017).

Capella Regalis Men and Boys Choir was founded in Nova Scotia by Nick Halley in 2010 to build upon the best aspects of the centuries-old European tradition of men and boys church choirs and to revitalize this method of music training in Canada. The Capella Regalis Girls Choir launched in September 2022. Capella Regalis is free and open to any child who passes a basic audition. Most new boy choristers (from age six) begin in the Probationers Program, rehearsing for one hour each week, before being promoted to full-fledged choristers in the Senior Choir. The Girls Choir recently began offering weekly rehearsals for girls ages 7 - 13.

Capella Regalis regularly sings Choral Evensong in the Cathedral Church of All Saints, Halifax, as part of the Cathedral's Sundays at Four series, and rehearses twice weekly at St Andrew's United Church, Halifax. The choir also performs concerts around Nova Scotia and beyond in a busy September – June season. 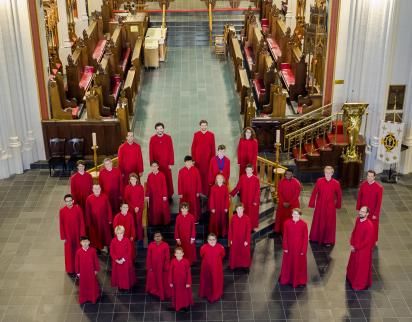 Senior Choir boys and men in the Cathedral Church of All Saints, Halifax (2019).

The choir's most recent year of performances began with a video release on May 1, 2021, during the Covid-19 pandemic, of J.S. Bach's Easter Cantata BWV 4 with chamber orchestra in St Mary's Basilica, Halifax, supported by a project grant from Arts Nova Scotia, and ended with a Scotia Festival of Music Highlight Concert in June 2022 featuring Nick and the boy sopranos of Capella Regalis alongside Canadian violinist Kerson Leong and string orchestra in the Canadian premiere of John Rutter's "Visions" (a violin concerto written for Leong and boys choir).

Capella Regalis has hosted other choirs and performing artists from the local community as well as from across Canada for special projects, and has itself received performance invitations from presenting venues across Nova Scotia, as well as venues in New Brunswick, PEI, Quebec, and Ontario. The choir has completed six performance tours in the Maritimes. 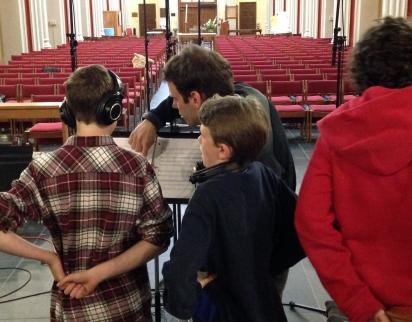 Director Nick Halley works with the boys during a recording session (2014).

Capella Regalis has released three CDs: Love Came Down: Carols for Christmas (2019), Greater Love (2017) and My Eyes for Beauty Pine (2014), as well as various online performance broadcasts (visit our Shop and Video pages for more information). The choir has also collaborated with other non-profit organizations on charitable causes ranging from nature conservation to food drives, and has given performances hosted by different Lieutenant Governors of Nova Scotia over the years. The choir has provided many free, interactive choral performances in elementary schools in Halifax, and led workshops for other children’s choirs.

In addition to services, concerts, and recordings, the boys of Capella Regalis enjoy a summer choir camp in the last week of August and other musically and socially enriching outings and experiences. 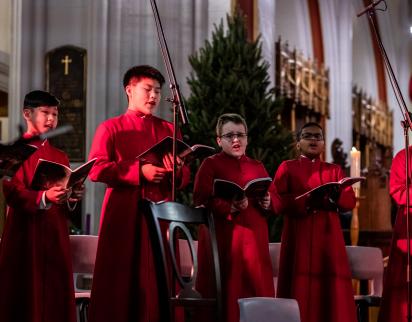 Choristers performing during a concert (2019).

The journey to adulthood for boys is a challenge that has garnered the interest of researchers, educators, and social critics over the last few decades. A men and boys choir, with its built-in system of mentorship, is uniquely capable of addressing the issues of leadership, mental focus, and inspiration that boys face at this stage of life. The result of such training is to access some of the greatest music humankind has produced over the last eight centuries.

Now, with the launch of the Capella Regalis Girls Choir in Fall 2022, girls and young women as well as boys and young men will receive a free music education in a centuries-old tradition.

Capella Regalis is a free program open to any child who passes a basic audition (although we encourage donations from families who are able to support the program, there is no dues requirement). The choir also provides volunteer-based transportation from school to regular rehearsals for youth who otherwise would not be able to participate. Capella Regalis is a registered Nova Scotia non-profit society, and an educational outreach program of Musique Royale, a music presenting charity in Nova Scotia.

By modeling itself on the great Cathedral choirs, Capella Regalis offers a rare culture of mentoring through which the boys can thrive and learn. And it does this within the context of developing musical literacy by singing some of the greatest works in our tradition, which is to say, it trains young men to be attentive, wakeful, disciplined and courageous.

Paul Halley, excerpt from an audience letter in December 2010