Nick's Letter to the audience - To Bethlehem With Kings 2019
– 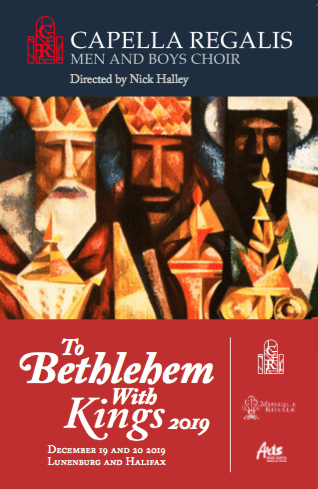 From the 2019 To Bethlehem with Kings concert program:

WELCOME FROM THE ARTISTIC DIRECTOR

If you told me ten years ago that the fledgling choir I had just started would, in my lifetime, be capable of the performance of A Ceremony of Carols that you’re about to hear, I’d have begged you to stop toying with my emotions.

You would have been talking to me outside of St George’s Round Church, where the choir first got its start, and I’d have just finished a hair-raising rehearsal with a whole crew of boys who had absolutely no idea what I was trying to do, or what they were supposed to be trying to do for that matter. At that time in the choir’s history, and for the first couple of years thereafter, rehearsals were some of my least favourite moments in the week. At first we only met once a week, for an hour and fifteen on Monday evenings, during which I spent the bulk of our time together making sure the boys didn’t actually wreck whatever space we happened to be occupying (usually the beautiful interior of St George’s or the King’s College Chapel). The after-shocks of these early-days rehearsals were only marginally mitigated by “Martini Mondays” at The Fireside.

Now, though the boys would have a hard time believing it, rehearsals with them are some of my most enjoyable musical experiences and I look forward to those two or three weekly moments with real enthusiasm. How did things change? Sometimes perceptibly, sometimes not – the old two-steps-forward one-step-back routine. All that was perceptible immediately was that great music speaks to everyone, whether they know why, or how, or not. The boys loved the music from the get-go – they just didn’t know what to do with it. What happened was that a small nucleus took shape over the course of the first few years, such that the second generation of boys coming into the choir could learn from the first (some of whom are singing with us tonight as altos, tenors, or basses), and so on – until we come to today, when these relative newbies are capable of singing this fabulous, rather technically difficult music by Benjamin Britten, and doing it justice.

One of the boys from that first generation of CR sopranos, who, at the age of nine, was there for the very first rehearsal, recently sent me an email from Montreal and he’s given me permission to share a portion of it with you:

“As I get older, attempting to carve out a life in music away from home, I find myself thinking often of how fortunate I am to know what I want to do with my life, to have the opportunity to do it, love it, and, occasionally, feel it touch the soul. All this makes life a joy to live, and I know, without a doubt, that it wouldn't exist if not for a wonderful ride that began in a church at the age of nine.”

Thank you for coming to this evening’s concert, our tenth anniversary of To Bethlehem With Kings. Your presence brings us just the right spirit for singing.

A Letter from the Director (Fall 2022 Appeal & Newsletter)